Today, we are able to receive comforts and products at our doorsteps thanks to technology. Technology is now peaking at pitch range, this has been injected into every aspect of the world from a small needle to large airplanes.

Talking about airplanes, CES 2018 was a platform where multiple and marvelous innovations were brought to the market. A particular mini craft or possibly a mega drone was the highlight of the show. This is basically designed to carry a couple of passengers inside the cabin.

Unlike the regular Helicopters, Volocopter does not have a huge fan on its head but has multiple fan spread on the roof. 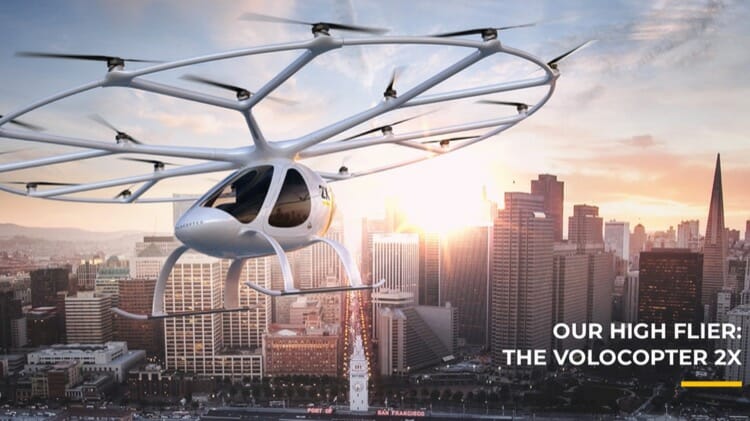 Volocopter, a newbie designed and developed by the Volocopter team has been enabled with the battery power composed of fiber composites. The light construction of the drone helps to lift itself with a great ease. The vertical lift and vertical landing is quick enough and occupies lesser space than the conventional helicopters.

Volocopter can carry a maximum of two passengers. It is built with a weight of 290Kgs, which makes the flight and travel very light and easy. The drive and controls are designed and well-crafted such that the pilot handles the maximum operation via remote sensors.

The Flying Bot/ Heavy drone is compatible to move across every terrain without any restriction. It can reach the maximum altitude of 2000 meters but on an average, it is maintained at 1200 meters for a safe flight.

This drone moves in the air for a maximum period of 17 minutes at a peak speed of 70kmph this accounts to 27kms. At an optimum level, this drone is designed to travel 27kms at a stretch and the optimum speed for the travel is 50kmph which accounts for 24-minute travel duration.

Also Read: Best Gaming laptop which can be used for mining

The Volocopter is enabled with 9 independent battery systems, and the battery type is Lithium-ion battery which connects the 9 batteries to 2 motors each and total lift accounts for the 18 motors to induce power at once and lift up the car. The Volocopter is enabled with Gyroscopes, acceleration sensors, magnetic field measurement sensors, manometers sensors for a safer travel.

The idea is to create a drone which can be used by a 5-year-old and does not need any manual intervention or controls. You just need to know your destination and drone will do its work to take you there safely. Hopefully, Volocopter will be flying in your cities sometime later this year.