Amazon is Planning a New Messaging App Anytime for its Users

Looks like Amazon is planning to launch its own messaging app called Anytime.

They have launched ‘Chime’ for their enterprise customer earlier this year but according to AFTVNews, they are looking to expand that infrastructure for regular customers.

There are so many messaging app already in the market competing with each other to gain market share. Anytime will be another one but Amazon is trying to differentiate with a big feature list to satisfy every customer in the market.

Amazon have started to survey customers for the features they want to see in an messaging app and looks like they don’t want to leave any stone unturned.

Based on the survey’s it looks like a full feature rich chatting app with the support of audio and video. It will support multiple platforms, group audio and video calls, end-to-end encryption, stickers and emojis. 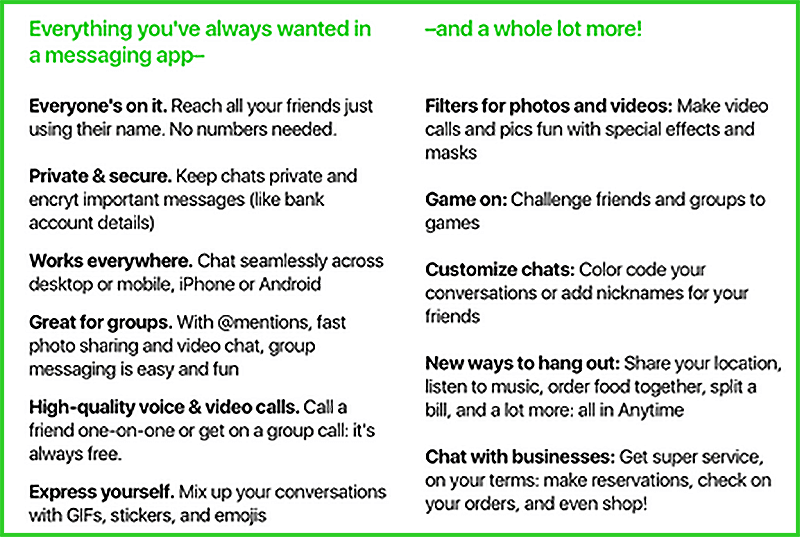 The major differentiation which they want to create is through removing phone number attachment from the app. Most of the current messaging apps like WhatsApp, Allo, Duo etc requires you to attach a phone number to access the app.

That’s where Apple iMessage app shines as it provide multiple way to reach user, so you always don’t need a user phone number. That’s the prime reason iMessage work across devices for a user and with the upcoming iCloud sync, it will be much better.

People like me, who keeps multiple phone has always had problems with these messaging apps. You have to keep in mind which phone to use to connect to specific person, iMessage solves this up to a limit. As iMessage is limited to Apple’s ecosystem, you can’t reach a person who uses other platforms.

Looks like Amazon is planning to launch Anytime Messaging app on most of the platform with automatic sync inbuilt. You can just reach your friends with a ‘@’ mention and they can respond from any device.

Not only that, they are also planning to add photo and video filters, Games, sharing and enterprise support right from the app. There is no other app which does all this thing with ease. Only Apple’s iMessage and FaceTime combination comes close in terms features but they are also lacking at group audio and video.

So what do you think, are you looking for one more messaging app to be added in your app drawer?

How To Setup Email On AWS LightSail WordPress Install