5 New Android P Features Which You Will Get This Fall

We don’t know what Google will call its upcoming version of Android, maybe Android Popsicle. But currently, it is commonly referred to as Android P.

It is Google’s most ambitious and promising update to change the role of smartphones and other such devices which have become an integral part of our lifestyle.

Google has already released Beta version of Android P which you can install from Android Beta Site. This Beta install gives a sneak peek of some of the upcoming features of Android P.

Now, I did notice very similar themes in this year iOS and Android updates. Looks like both the companies are looking into similar features to enhance their software. We will talk about that also.

Note – I do not recommend to install the Android P Beta on your primary phone. It may contain some bugs and third-party apps might not function correctly. 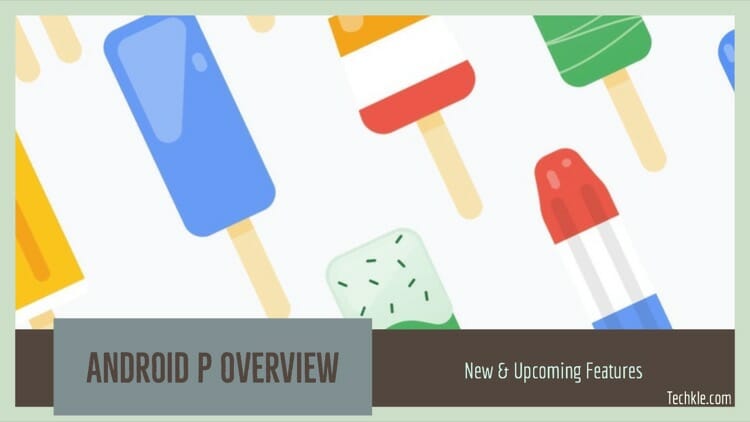 The objective of Google can be broadly stated as a way to nullify the counterproductive effects of the smartphones. Most of the smartphone users are somewhat “addicted” to it. Android P features are expected to effectively put an end to this dangerous situation by limiting the use of certain apps to a user-defined time limit.

Thus, smartphones are expected to play a bigger role in human lives and not just act as mere all-in-one toolboxes meant for entertainment and help.

Here are 5 new Android P features that you are going to get this Fall.

Google is basically trying to let third-party apps permeate into parts of the Android OS.

The ‘Actions’ feature allows the third-party app to run from Android search bar, Play store, Google Assistant or almost anywhere possible. This allows you to perform app functions with simple shortcuts – such as touch pattern or gesture.

So now you can order pizza from your food ordering app with just some simple action.

The ‘slices’ feature does not exist in multiple places right now but only in Android P’s search bar.

Slices are UI, short for User Interface designs that actually surface the portion of an app to provide specific actions.

The difference between Actions and Slices is that the former just mediates the function of an app in the device through the Android OS whereas the latter actually creates a UI for the purpose.

The inclusion of these 2 features is to realize Google’s philosophy for Android P, which is ‘Less is more’.

These Android P features help you to perform a lot of actions in one or 2 steps. It also allows you to use a lot of apps without the need to keep switching between them.

Apple has also announced Siri Shortcuts for iOS which is similar to Actions but only limited to voice assistant. So iOS users will also be able to interact with third-party apps by just using their voice.

Considering, Android is more open, Actions are integrated into many other parts of the OS as well.

Google Allo was an app which was using machine learning to bring smart reply while typing. Now you will get this functionality directly backed into an Android messaging app.

You can directly reply from the notifications on the lock screen and get smart suggestions to decrease the typing. 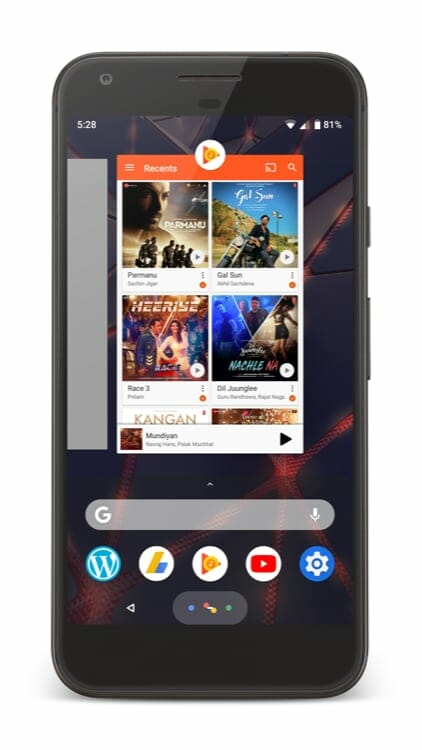 The gesture navigation is one of the most remarkable of the new Android P features. It might sound familiar if you are already aware of gestures on iPhone X home screen.

In the beta version that is available for now, the gesture feature is not running by default but needs to be activated from the system settings of the device. You can activate it under System -> Gestures -> Swipe up on Home Button.

Swipe Up on Home Button

This feature gives you a totally new experience and an innovative interface to interact and navigate within your smartphone.

This will replace the bottom menu bar and icons with a small verticle line, similar to iPhone X. You can swipe up to get the recent apps and suggested an app. Close the app by just swapping the app from that window.

If you don’t stop and do a long swipe up, you will get the app drawer. The only issue, for now, is closing any open app. You have to use the back button rather than swapping up (like in iPhone X). Back button will come up time to time when you need to use it.

Recent App button is gone permanently. This obviously, has a reason behind it as the right side is kept empty for swiping which is one of the most if not the most important interfacing gesture in Android P.

The Recent Apps has a whole new look and the interesting fact is that the Recent App key is gone but in turn, the split screen and app pinning keys have a lot of extra functions. This feature if developed successfully, later on, is going to change the way we look at Android.

There are a bunch of other uses of this feature that are either being developed or have been released in a very crude state. The feature is not as straight-forward or simple as it looks like.

This feature is developed by a collaboration between the Android team and Google’s DeepMind team.

The feature uses machine learning to know which apps you are more likely to use within the next few hours and which ones you won’t be needing in the immediate future. It is based on your trend and pattern of using these apps on a daily basis.

Dave Burke of Google claims that by using this feature in the smartphone as an on-device machine learning mechanism it is possible to reduce up to or above 30 percent of the CPU wake-up calls. This should save your battery and give you extra screen time.

Based on your app usage trends, it groups the app into 4 different categories. Each category gets a different wake cycle and use of resources.

This feature is still being enhanced and the machine learning mechanisms are being optimized to make them more dynamic, accurate and user-friendly.

By default, it is enabled but you can disable it at Battery -> Adaptive Battery.

Often, we get lost in the virtual world and keep staring at our smartphones for hours not only wasting time but also ruining our lives. But ultimately who we blame is the smartphone.

So, Google took it upon itself to set this thing right by changing the way the smartphones are involved in human lives – extending its impact from a mere tool to ease the lifestyle to becoming a part of the lifestyle itself.

They are launching an app usage dashboard under their effort of “Digital Wellbeing”. The Android OS keeps a record of the time spent on each app and shows in a dashboard. You can set limits accordingly to prevent unnecessary usage of the apps and the device as a whole. The time limit is obviously set by you when and if you feel guilty of yourself.

Now, when you hit the time limit the app will close and turn grey so that you can’t choose to operate it any further. But still, if you need to use it any way you can remove the time limit from your Android settings.

The feature has glitches right now in the beta form. But there are a number of other functions that are being planned to be added to reduce the hours we uselessly, sleeplessly spend staring at our phones.

Apple has also announced its own implementation of App limits including parental control at WWDC. They are also providing reports and allowing you to limit the app usage. We still need to see how much parental controls are inbuild in Android Dashboard. Traditionally, iOS always had an upper hand with respect to parental controls.

Android P looks promising. It will change the way Android phones are involved in our daily life.

The new Android P features are obviously unique and still developing and many of these are expected to live up to the company’s and also the customer’s expectation by Fall.

So if you have a secondary device which is eligible for the Android Beta Program, you can install and try these new Android P features.

How To Use Mobile Apps To Control The World Around You