An Apple TV is not just your regular TV, right? It is definitely superior to some ‘hobby’. Apple TV is a vision, a full-fledged TV system that has got its own selection of apps, and even better, amazing games that you can play with the help of controllers. 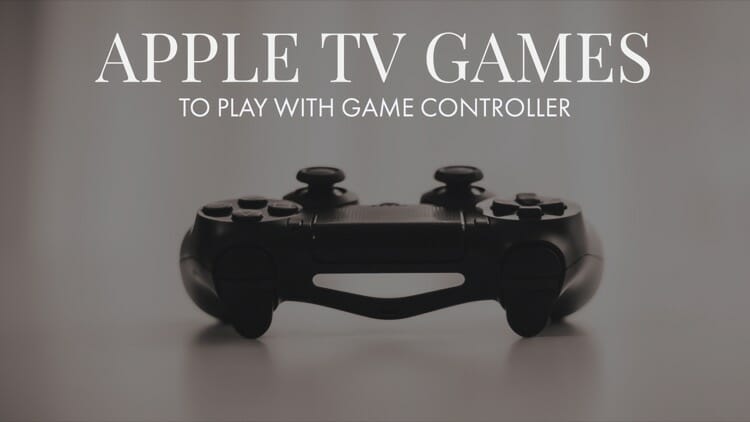 It can surely be a bit tempting to consider Apple TV as a certain device that can be used for the entertainment of the traditional and more casual gamers. And why not, there are numerous Apple TV games you can play in here. Let’s list a few.

Though Apple TV comes with a remote which can play all the games available on tvOS, sometimes old-fashioned game controller is what we want.

Here we are with a list of top 10 games of Apple that you can definitely play with the help of a Bluetooth game controller.

A futuristic and amazing game of driving is one of the best multiplayer Apple TV games on the list. Just the right kind of boost that you need.

Ever heard of the very popular game, Wipeout? Well, AG Drive resembles the format of that particular game and features some adrenaline-rushing driving and pacing along the unpredictable, windy tracks in the cities that have a great backdrop. And not to forget the best part about the game, there are no in-app purchases here.

Every player is on an equal level of playing in this game. All you have to do is win races and go ahead.

One of the popular favourites of people, Alto’s Adventure is available on Apple TV. A superb skinning adventure, this amazing game has features that are similar to that of the iOS adventure game, Tiny Wings.

You can absolutely play the game with the help of a controller and all you have to do is navigate yourself down the path of the mountain by dodging all the obstacles like the cliffs, rocks and much more. Albeit, the graphics could improve a bit, but nonetheless, it is a wonderful game for playing on an Apple TV.

Did you know that the Siri Remote controller came with a Gyroscopic and Accelerometer functionality? No? Well, now you do and it is an amazing thing because now you can play Asphalt 8 on the Apple TV. Surely, you have heard about that.

The ‘God’ of racing games, Asphalt 8 can be a fantastic choice for playing. Known to be one of the most amazing games, this one is a popular choice for racing game lovers.

Just rotate your controller and simulate the steering wheel and if you want more granular control or console feeling, use a Bluetooth game controller.

With the new addition of the remote controller in the Apple TV, you can have the exact same feeling as if you are playing from a full-on gaming console. The added accelerometer is another major invention to the game. And what better way to use the remote than to play dome Beat Sports in it.

An amazing mix of music and cartoon sports, this one certainly steals the show with its amazing graphics and cool format. The game is so interesting that it can be an Apple TV family game option as well.

Another popular name in the iOS games section is The Afterpulse. You will definitely need bluetooth controller to play this game.

If you are looking for first-person shooter games, there is nothing better than this online multiplayer shooting game on your Apple TV. Join the other online players in an 8-player team death-matches and kill as many people as you can.

Personalise yourself with headgear, bodysuits or armor, pick up some guns and jump into real-time action.

Chameleon Run is one of the best Apple TV games with a controller. You can easily swap the colors and use it to fly. And all of that with just a simple tap of the button. A simple and efficient game that has easy control methods. All you have to do is jump and change color.

The challenges are pretty simple and all you can do in here is create a fantastic gaming opportunity. But don’t be fooled by the simple rules as it can get pretty devious in here. Rapid movement and reflexes are important.

With all these racing and shooting games, how about a bit of sport. Relive your fun moments from childhood with this retro style soccer game. It is one of the best Apple TV games for sports and you can use the Bluetooth controller to menubar the ball with control.

Go around the world with 18 different stadiums and play different cups to regain the world of soccer. You can play in multiplayer mode to have one on one completion with your siblings or have fun with family.

Beach Buggy Racing is not exactly the newest of the Apple TV games, but that doesn’t mean that it is not as awesome as the other ones.

Bring a new freshness to your Apple TV by getting this amazing game. It goes extremely well with the controller and gives you the feel of a game played in the console. Sounds amazing, right? Well, it most certainly is.

Almost similar to Mario Kart, only a lot better. You get special power-ups and abilities during the game to keep the interest alive.

It is all about the strategy and resilient in the war times. And when you have unlimited Tanks and never-ending territory to cover, what can be better than that. Infinite Tanks is a war game which takes the graphics to next level and allows you to do complete destruction with your custom tanks.

Perform upgrades to your tank or get new powerful tanks to go into the online war with your enemies. You can have 60 different level of progressions or unlimited online fun with this game.

It is time for the champion. Galaxy on fire is another one of those highly impressive games that can be played on the iPad and iPhone and now, on the Apple TV as well.

With spectacular graphics and amazing controls, this games remains one of the most popular choices for gamers.

So, these are some of the best games that you should definitely try out with your Apply TV and controller. What are you waiting for? Go get one now.

Sanjeev is an IT Consultant and technology enthusiast. He has more then 15 years of experience in building and maintaining enterprise applications. He is been with Android from T-Mobile G1 time but recently shifted to iOS. He loves to code and play with latest gadgets.